#NotinNewarkandSherwood campaign steps up a gear

Newark and Sherwood District Council has stepped up the fight against fly tipping and is using one of its new refuse vehicles to spread the message that littering will not be tolerated. 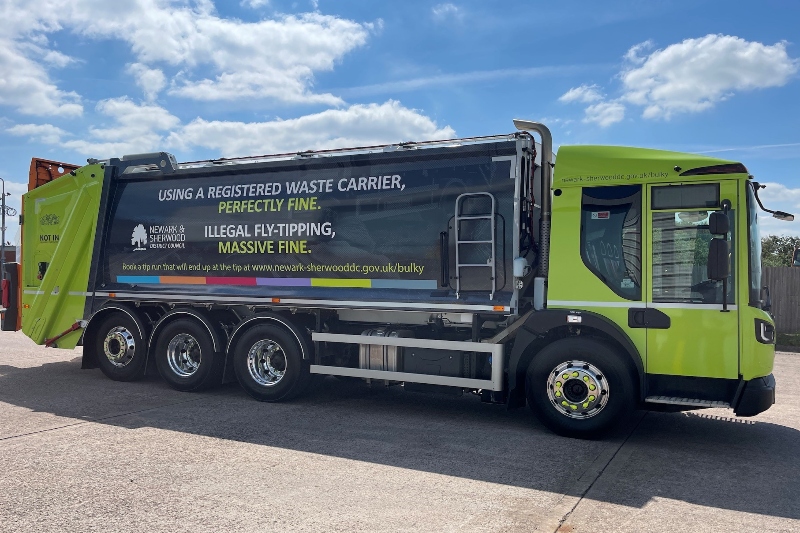 Andrew Kirk, business manager, Environmental Services, Newark and Sherwood District Council said: ‘Fly tipping is a huge problem for us as it is in most areas around the country. We are a very rural district so there are lots of country lanes and laybys where people can leave litter.

‘We are running a big campaign to raise awareness and wrapping one of our refuse trucks is a very cost-effective way to spread the message far and wide. The sheer scale and size mean that people really notice it. Two years ago, refuse truck manufacturer Dennis Eagle wrapped one of our vehicles, with a cartoon-like recycling image aimed at children and it made a big impact, so we know it works.

‘The vehicle looks great and we’ve had great feedback so far. CVW helped to make sure the design was perfect for the vehicle and the quality of the vinyl literally shines through.’

In addition to the ongoing communications campaign, the council has been organising days of action, whereby an area that is renowned for littering is targeted and a host of resources devoted to cleaning it up. Street cleaners, volunteer groups, parish councils and representatives from highways, the police and the fire authority, all come together to show what can be achieved.

Transit advertising is an excellent way to reach audiences of all ages and backgrounds, and because refuse vehicles typically travel at very slow speeds, the opportunity to convey messages is even greater.

Studies show that wrapped vehicles reach audiences of anywhere between 30,000 to 65,000 people per day depending on whether they are travelling in suburban areas or major cities. Vehicle wraps are also thought to be the lowest cost-per-impression form of advertising, with the added advantage that messages and images are displayed 24/7. Research confirms that on average 75% of people recall what they have seen on wrapped vehicles.

Jonathan Thomas, director, Creative Vehicle Wrapping said: ‘We wrapped the entire body, cab and hopper of the truck to convey the council’s message, so it has maximum impact. Refuse vehicles are very slow-moving billboards and great for raising awareness. Wrapping also protects the vehicle by preventing stone chips and other damage to the paintwork.’