Hydrogen fuel cell RCVs will take to the streets in seven European cities this year as part of the EU-funded HECTOR project to assess the potential of this technology to decarbonise waste fleets. Lotte Debell reports.

A new hydrogen powered RCV was delivered to Milieudienst Groningen in the Netherlands in May 2019. Supplied by Geesinknorba, it is one of only a few such vehicles in operation in the world and is part of Groningen’s effort to transition to an emissions-free municipal fleet.

Groningen is one of seven European cities participating in the EU-funded HECTOR project to deploy hydrogen fuel cell refuse collection vehicles in a four-year trial of the technology across Europe.

Hydrogen fuel cell vehicles use compressed hydrogen to create the electricity that powers the vehicle. The technology has a lot of support across Europe because of its potential to significantly reduce greenhouse gas emissions. The only emissions from a hydrogen fuel cell vehicle are water and heat. Widespread adoption could improve air quality and energy security, and reduce global dependence on fossil fuels, but it is also expensive and heavily reliant on infrastructure that is, in large part, yet to be built. So, just what part does hydrogen have to play in a carbon-free future for transport, and in the waste sector specifically?

The EU, in its European Strategic Energy Technology Plan of January 2008, identified hydrogen and fuel cell technologies as critical to meeting the target of reducing greenhouse gas emissions by 60% to 80% by 2050. Later that year, the Fuel Cells and Hydrogen Joint Undertaking (FCH JU) was launched with the aim of commercialising deployment of this technology by 2020.

As a result, there has been significant investment in and support for projects aimed at furthering the technology within the EU, of which HECTOR is only one of the most recent. The Clean Hydrogen in European Cities project, for example, focused on the commercialisation of hydrogen fuel cell buses while Project HyTEC trialled 30 hydrogen fuel cell passenger vehicles in London and Copenhagen, assessing technical performance, well-to-wheel impacts, and non-technical barriers to larger-scale implementation of hydrogen transport. 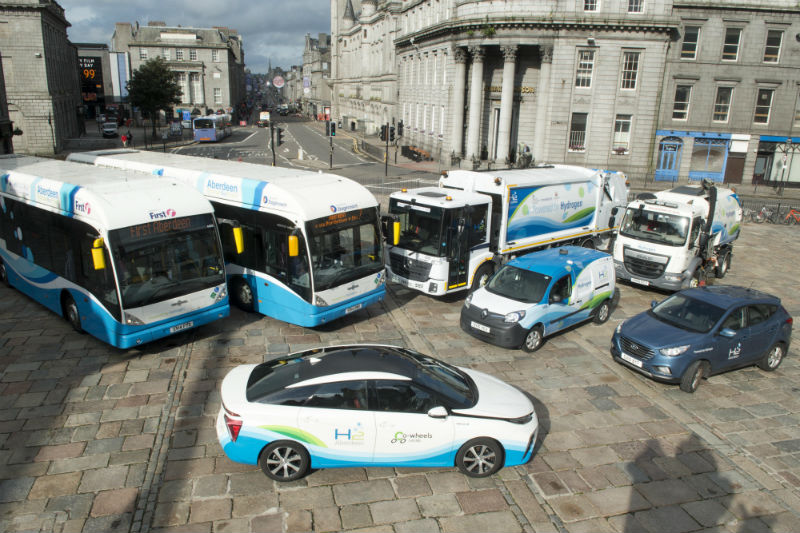 HECTOR (Hydrogen Waste Collection Vehicles in North West Europe) was approved in January 2019 and will assess the viability of hydrogen fuel cell electric vehicles (FCEVs) as a means of decarbonising European waste fleets. The project is coordinated by European association HyER (Hydrogen Fuel Cells and Electro-Mobility in European Regions) and supported by €5.5m in funding from INTERREG North West Europe. In addition to Groningen, the seven pilot cities include Arnhem, also in the Netherlands, Duisberg and Herten in Germany, Touraine Vallée de l’Indre in France, Brussels in Belgium, and Aberdeen in Scotland.

HECTOR is targeting RCVs because they are heavy users of diesel and operate in residential areas, contributing to local air quality issues. The project will test vehicles under normal operating conditions, some in city centres, others in rural areas. They will collect different types of waste and will operate on different schedules to enable the project to collect data on a range of different operational contexts. The first vehicles are expected to be in operation by summer 2020.

Aberdeen, one of the seven HECTOR cities, has been a pioneer in hydrogen transport since 2012 when the city decided to target hydrogen as an alternative to fossil fuels. The initial phase started with a fleet of ten hydrogen buses to prove the concept and demonstrate to the public the safety and efficiency of hydrogen vehicles. The city now has 15 more buses on order and a fleet of 40 hydrogen cars, as well as hydrogen vans, two Geesinknorba hydrogen-diesel dual-fuel RCVs, and two dual-fuel road sweepers.

Aberdeen wants to become the centre of excellence for hydrogen. It is already one of the leading cities in Europe. Only Groningen in the Netherlands has more hydrogen vehicles on the roads. The city chose Geesinknorba to supply the FCEV RCV, partly because of the company’s experience with electric and hydrogen vehicles − Geesinknorba has been working on sustainable solutions for waste collection for more than 15 years and hydrogen has been on its agenda for a while because of the level of support for HFCEVs across Europe − and partly because of the performance and reliability of its vehicles. There are currently around 20 Geesinknorba vehicles in the city’s fleet and eight more on order, including the HECTOR RCV.

HECTOR takes the next step towards making RCVs cleaner. The primary objective is to reduce carbon emissions and other harmful diesel pollutants. However, the project will also consider the reliability of the technology and vehicle efficiency. If this is not on a par with diesel, it will be considered a failure.

Geesinknorba’s André Lagendijk explains that Aberdeen’s new hydrogen fuel cell RCV will be based on Geesinknorba’s tried-and-tested Li-On Power Pro electric vehicle. A GPMIV split with Li-On Power Pro body will be mounted on a Mercedes Econic chassis converted to hydrogen, with a storage capacity for 15kg of H2. It will have a range of 155 miles (250 km), enabling it to travel greater distances than an electric vehicle.

The RCV will use Aberdeen’s existing fuelling infrastructure, which means it will be fuelled by certified ‘green hydrogen’. This is produced from renewable sources, unlike ‘grey hydrogen’, which is produced from fossil fuels such as natural gas and still accounts for most of the world’s hydrogen production. All the HECTOR partners will use green hydrogen where possible to maximise emissions savings.

The costs savings are more problematic – for now. Even in Aberdeen, which already has two hydrogen refuelling stations, the costs are still not on a par with diesel, and the vehicles remain very expensive. This is a barrier to more widespread adoption, but it also adoption that will drive those costs down. Commercialisation requires deployment, and it is projects like HECTOR that lay the groundwork.

Aberdeen is ahead of the game on infrastructure, but Europe’s hydrogen network is growing. The Hydrogen Mobility Europe (H2ME) project launched in 2015 with €32m in funding from the FCH JU to support the deployment of FCEVs and hydrogen refuelling stations. It has deployed close to 500 hydrogen-powered FCEVs and opened 30 hydrogen refuelling stations across Germany, France, Scandinavia, the UK, and other European countries. H2 Mobility Deutschland, one of the partners in H2ME, plans to have 100 stations operational in Germany by 2020 and is averaging one new station every two weeks. There are currently 76. In 2017, the Office for Low Emission Vehicles announced the £23m Hydrogen Transport Programme to support the roll-out of hydrogen refuelling stations and fuel cell vehicles in the UK. Other countries are also investing in hydrogen infrastructure and many authorities and regions believe it is the way forward for transport.

However, solving transport’s dependence on fossil fuels will require a mix of technologies. Electric is ideal for people living in inner cities. Most vans in the Aberdeen fleet are electric as they don’t travel further than 50-75 miles per day. It is only once vehicles start travelling more than 100 miles per day that alternative fuels need to be considered. Aberdeen’s buses do around 200 miles, and its RCVS also need the extra range.

Cost and infrastructure barriers aside, it is for longer range requirements that hydrogen really comes into its own, believes Geesinknorba’s André Lagendijk. ‘This is not an either/or situation. On 1kg of hydrogen, an H2 RCV can drive 10km. Depending on the requirements and storage capacity, these RCVs have a potential range of up to 800km. This is where we see the future of this technology in the waste sector, as a solution for suburban and rural collections where vehicles must travel longer distances. For other applications, electric remains a proven solution, and battery development is moving forward at such a pace that I expect to see a significant increase in the number of electric vehicles on the road in the short term.’

In common with other sectors, there are no black and white answers when it comes to transport and the environment. Tempting as it might be to frame the debate in terms of one technology versus another, the reality is much more complex, and ultimately, solutions will be application specific. For the waste industry, this means that fleet operators must assess the requirements and circumstances of their fleets, and the communities they serve, and determine which solution is best based on their individual needs and capabilities, whether that is hybrid, electric, CNG, hydrogen, or something else. And, as restrictions on diesel and petrol accelerate, projects like HECTOR will be vital in helping the industry transition to its goal of a carbon-free future.

This article was originally published in the Winter 2020 issue of LAPV. Click here to sign up for your free subscription to the magazine.