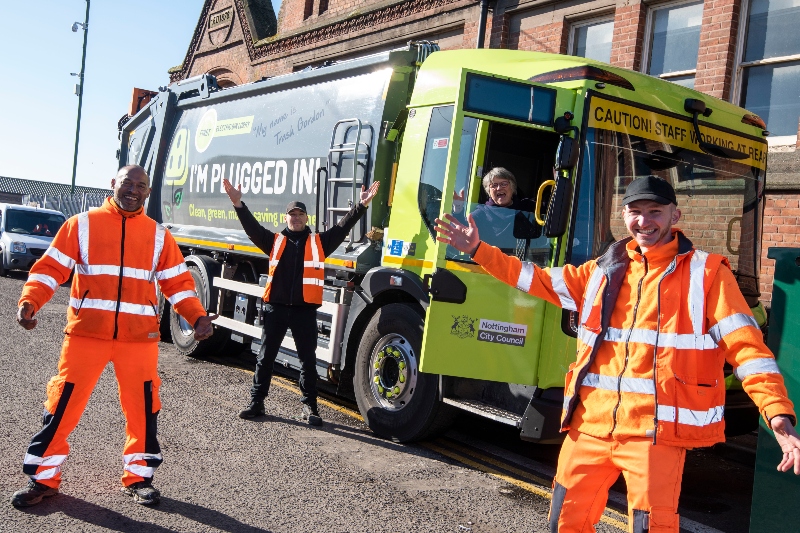 The vehicles, which form part of Nottingham City Council’s target to be the UK’s first carbon-neutral city by 2028, were the first off the global production line to be purpose-built electric, as opposed to retrofitted former diesel models.

The lorries have been on the streets of Nottingham since before Christmas and are expected to save the taxpayer £32,000 per year in running costs and reduce carbon dioxide emissions in the city by 52 tonnes per year – the equivalent of 2,000 trees.

The public was asked last month to submit suggestions for names and they chose Binderella and Trash Gordon.

‘It’s great to be able to officially unveil these vehicles today and I’d like to thank everyone who helped to choose names for them,’ said Cllr Sally Longford, deputy leader of the council and portfolio holder for Energy, Environment and Democratic Services.

‘They were the first ones off the production line, which is a big deal for the city. It reaffirms Nottingham’s place as a leader in putting innovative electric vehicles into operation.’

The vehicles – manufactured by Original Equipment Manufacturer Dennis Eagle and supplied to the council by Terberg Matec UK as part of the Nottinghamshire RCV procurement contract – have replaced diesel equivalents to help empty household bins across Nottingham.

Andrew Smith, assistant fleet manager, commented: ‘In the first few weeks, we saved around 60 to 70 litres of diesel per truck, per day. That’s more than 360kg of CO2 each day which we’ve not pumped into the atmosphere.

‘The vehicles’ power and manoeuvrability means they’re finishing around an hour earlier and are able to handle hills with full loads much better than their diesel counterparts.’

For more on Dennis Eagle's eRCVs check out the winter issue of LAPV.