Council to cut its vehicle emissions by up to 90%

Eastleigh Borough Council is switching all of its diesel lorries, vans and cars over to hydrotreated vegetable oil (HVO) fuel as it transitions to net zero carbon emissions. 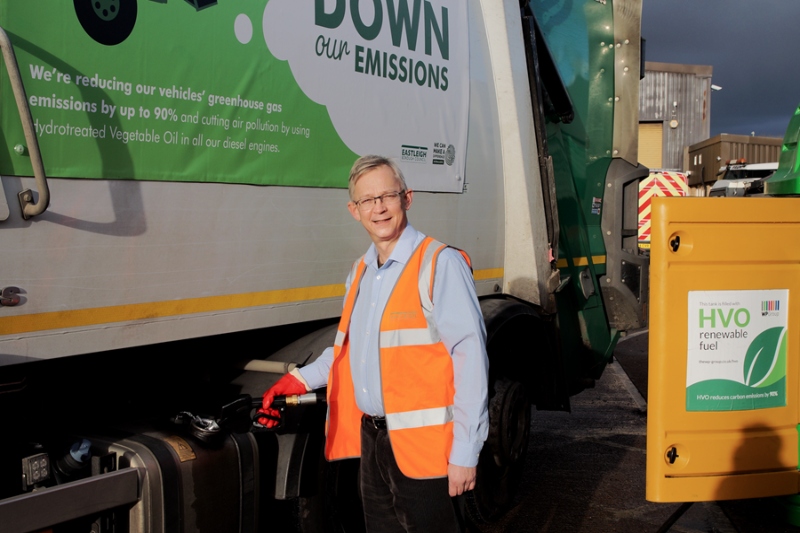 The council's entire fleet of bin lorries, the vans operated by its Streetscene team and even some mowers and other small vehicles will now be run on the fuel.

The move is estimated to lower council vehicle carbon emissions by 90%, while also cutting air pollution.

HVO is seen as a transitional fuel by the council, which aims to switch its vehicles over to electric, and other zero carbon equivalents by 2030. The council has already invested in several electric vans and has three new electric bin lorries on order.

HVO is a biofuel that works in diesel engines. It’s considered to be a more sustainable alternative to fossil fuels and is created by hydro-processing waste vegetable oils and fats. As well as being low carbon, the fuel produces up to 25% less NOx emissions and up to 42% less particulate matter, meaning a reduction in harmful air pollution.

Cabinet lead for the environment, Cllr Rupert Kyrle, said: ‘Switching our vehicles over to HVO fuel will mean we are lowering air pollution and producing less carbon while we upgrade the vehicles themselves to more sustainable equivalents over the next eight years. It shows we are committed to cutting our own emissions to net zero by 2025 and moving towards a net zero borough by 2030.’

New HVO fuel tanks have been installed at the council’s depot in Hedge End and will be topped up by vehicles which also run on HVO.